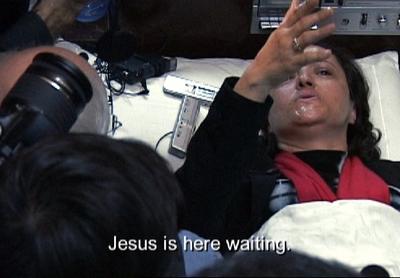 The Gates of Damascus​

Stigmata, apparitions, ecstasy, revelations... for Myrna Nazzour, a Syrian housewife and mother, miracles are a matter of course. She claims to bear the Stigmata wounds of Christ's crucifixion, and reports having ecstatic visions of Jesus and Mary. The Gates of Damascus documents her re-enactment of the Passion story: over Easter weekend, her body becomes a spectacle and her home becomes a shrine. Pilgrims, doctors and journalists come from around the world to witness the miracle, and to listen to the revelations from the woman who many consider to be a living saint.